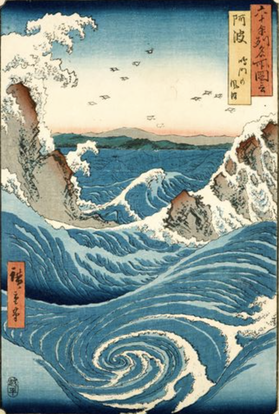 Utagawa Hiroshige (1797–1858) Considered the last great master of the ukiyo-e genre ("pictures of the floating world"). The Japanese artist was a hugely influential figure, not only in his homeland but also on Western painting. Towards the end of the nineteenth century, as a part of the trend in “Japonism”, European artists such as Monet, Whistler, and Cézanne, looked to Hiroshige’s work for inspiration, and a certain Vincent van Gogh was known to paint copies of his prints.

​Awa, Naruto no fuha -This late Hiroshige series contains seventy prints illustrating Japan's famous places. This view shows the Naruto Strait separating Awaji Island from Shikoku, where its famous whirlpools spiral round and round in eddies, sending water crashing against vertical rocks. A 19th-century European observer, versed in Aristotle and Homer, described it as "a sort of Charybdis"-the monstrous whirlpool of Greek myth.