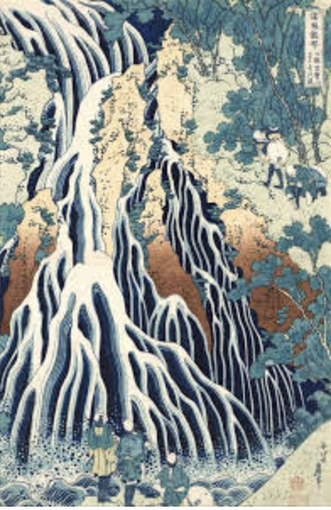 Katsushika Hokusai (1760-1849) was a Japanese painter and printmaker who was one of the top experts on Chinese art in his time. He was born in Edo which is now Tokyo to a family of artisans. His father did work on mirrors and painted designs, this is thought to have triggered Hokusai's interest in painting at the early age of six. In Japanese culture the use of many names is not unheard of but Hokusai used more than thirty names in his life time and they can be used as a sort of period guide into his artwork. During his studies at the studio of Katsukawa Shunsho, where he learned to master wood block prints and paintings, his name would change for the first time. It was here that his master dubbed him Shunro. It was in 1800 that he adopted the name he is most known for, Katsushika Hokusaui which was for where he was born and Hokusaui means North studio. He is one of the few artists who were lucky enough to achieve fame while he was still alive. His style influenced nineteenth century contemporaries such as those involved with the Jugendstil or Art Nouveau in Germany. All of this became part of a large Impressionist movement that included such well-known names as Monet and Renoir. The artist Herman Obrist's Whiplash Motif was obviously influenced by Hokusaui. His most well-known work is the woodblock print series from 1820, that is titled "Thirty-six View of Mount Fuji," this of course includes the world renowned image, The Great Wave of Kanagawa.

Mountain in Shimotsuke is a woodblock print, produced on paper with ink that measures 37.1cm by 26.2cm. This painting is featured as part of his series of eight paintings, based upon waterfalls in Japan, all of which were painted when he was in his seventies. Kirifuri Waterfall at Kurokami Mountain in Shimotsuke is located within the Nikko Tosho-Gu region, and was a most popular rest stop for those travelers who wished to visit the nearby shrines and temples in the area.